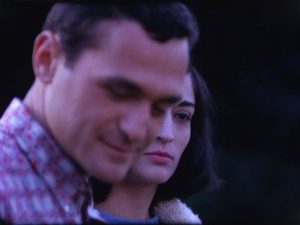 On Friday night I attended the world premiere of “Exposed: Songs for Unseen Warhol Films,” at the Carnegie Music Hall, an appropriately lavish and cozy venue for an intimate evening with Warhol and five pivotal songwriters. The “Exposed” project, a partnership with the Brooklyn Academy of Music (BAM) and UCLA’s Center for the Art of Performance, represents a collaborative, cross-disciplinary endeavor of a very public sort.

The five songwriters each provided an unique soundtrack to three, not-yet-publicly screened Warhol films, so the relatively small audience (honestly, I was surprised that the house wasn’t packed) was privy to a total of fifteen, 3-4-minute shorts. Stepping back for a moment, I will briefly mention a similar event that I attended back in 2011 at the Cedar Cultural Center in Minneapolis. Marc Ribot, the avant-garde guitarist, played his live score to Charlie Chaplin’s movie, The Kid, thus re-animating and reinterpreting the then-ninety-year-old film.

I’m interested in these types of collaborative projects because they present a very particular set of creative constraints, and require the melding of two (or more) artistic voices: that of the original artist (filmmaker, director, auteur) and that of the musician interpreting the imagery and film narrative. In the case of Marc Ribot and the five musicians that performed last night, the artists face not only the challenge of creating a musical score that they feel somehow matches or heightens the experience of the film, but also must navigate the complicated fact that they are reinterpreting the work of the dead and the highly-revered (and even idolized). Which begs the question: How does one collaborate with a dead artist? Does the living artist have more power than the dead artist or the other way around?

Music, arguably, has the capacity to completely alter the experience of a film. Stripped of any diegetic sounds, the unique soundtracks have the ability to transform the mood and atmosphere of the entire visual experience.

I was attending the premiere partly because one of my friends generously offered me a free ticket, partly due to my interest in the creative challenge described above, but also because I’m an unapologetic fan of some of the musicians involved in the collaboration. Watching Tom Verlaine (b. 1949) lope onto the stage in his modest way, yielding a guitar, was tantamount to going on a bike ride with David Byrne (I’d imagine), or eating dinner with Alice Waters. Best known as the frontman of the band, Television, Verlaine provided bare yet poignant musical accompaniment for Warhol’s films: John Washing (1963), Jill (1963), and Bob Indiana Etc. (1963). Sitting alone on the stage, Verlaine filled the auditorium with his mesmerizing and reverberating guitar sound, sticking to simple and repetitive melodies that were nonetheless effective, and far-removed from Marquee Moon (1977). 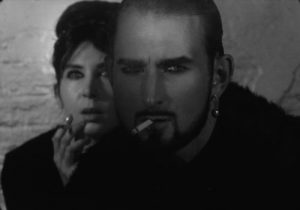 From Jack Cigarette, (1964) with Beverly Grant and Jack Smith

Martin Rev (b. 1947), of the electronic punk band, Suicide, stood in stark contrast to Verlaine, wearing vinyl pants, a tight t-shirt, and red goggle sunglasses. Where Verlaine’s music was spare, Rev’s was aggressive and unrelenting. Yet, his pure energy and noise also worked in its own way, demonstrating the skill Rev exerted to imbue the films with his own aesthetic sensibility without destroying the film’s integrity. At this point in the performance I wondered if the musicians had any say in selecting the films that they scored. After all, Rev’s raw force was well-suited to the hyper-sexual Superboy (1966), Allen (1964), and the disturbingly enchanting Jack Cigarette (1964).

Then came Eleanor Friedberger (b. 1976) in all her tall, slim, chique-ness, a figure who would have undoubtedly graced Warhol’s lens if she’d been the appropriate age or ever occupied his social sphere. I have to admit that I’ve never been a huge fan of Friedberger’s band, The Fiery Furnaces, but she did provide a peppy and poppy accompaniment to Screen Test: Donovan (1966) and Screen Test: Edie Sedgwick (1965). The most memorable film and music match-up was Marisol – Stop Motion (1963), a gem of a film featuring the beautiful sculptor, Marisol. This film seems to have truly brought the best out of Friedberger. There must have been something in the moving pictures themselves that resulted in something that was, perhaps, even better than the two things experienced separately. Isn’t that the ultimate goal of any collaboration?

Dean Wareham (b. 1963) performed three songs that seemed very much inspired by the Velvet Underground, and that were appropriately matched with Paraphernalia (1966), Nico/Antoine (1966), starring Nico, and Kiss the Boot (1966), revelatory of Warhol’s foot fetish.

The performance finished with a set by Bradford Cox (b. 1982), the frontman of Atlas Sound and Deerhunter, and someone I’ve long admired. This was my third time seeing Cox perform, and he brought his usual off-kilter vibe to the stage in the form of a graduation cap and gown. He scored two of my favorite films of the night, Mario Montez and Boy (1965), a spectacular short film featuring two men, a hamburger, and a sumptuous kiss, and Me and Taylor (1963), which contained a dance sequence perfectly punctuated by Cox’s atmospheric riffs. My only disappointment was that Cox didn’t sing. Whereas I wished Wareham had only performed instrumentals, I was longing for the warm embrace of Cox’s voice.

The concert finished within 75 minutes, without any intermission, leaving the well-dressed audience to spill out into the streets at an amazingly respectable hour. Left with images of thickly-lined eyes gazing out of a screen, and so many cigarettes smoked, I felt refreshed and rejuvenated by the experience. In my opinion, Warhol’s films were enhanced and elevated by their new, 2014 scores.