My friend died in May of 2017. Her name was Alex, and her sudden departure from this world has impacted me in profound and unexpected ways. I sometimes feel guilty for thinking about her, because she took her own life and there are so many people out there who need and deserve my attention (March for Our Lives is this weekend, for example).

As everyone out there forewarned me, my grief has ebbed and flowed. At first I felt it so intensely that it physically hurt. But after a few months, the pain subsided and I was somewhat relieved.

A week or so ago, Alex was on my brain again. Not that she had ever truly left, but she reasserted herself in my dreams, and I experienced flashes where I thought I saw her in a crowd, or walking down the street in the distance.

Alex was full of contradictions. She was an extrovert, a presence, a bolt of energy flying through a room. But she also, sometimes, would speak about feeling profoundly alone. She would suddenly become emotional, vulnerable, and worryingly self-critical.

She was also hyper-productive. Was simultaneously finishing her PhD, bolstering a non-profit, and creating a digital archive of local artworks when we first met. Despite this, she was afraid of leaving nothing meaningful behind when she died (aren’t we all, though?).

The difference, with Alex, was that she tried quite hard to fulfill this prophecy. She deleted, or did not renew the domains for her personal website, blog, LinkedIn, and Twitter accounts prior to ending her own life. She was an art historian, professional networker, and budding archivist, so she certainly knew the implications of these actions.

One of the few and unexpected places where she still exists, at least in traces, is on Wikipedia.

For a period of time, Alex was an avid Wikipedian. As with everything that caught her attention, she approached Wikipedia editing with an unmatched intensity that was both awe-inspiring and, undoubtedly, exhausting. In 2016, she organized (with Vicky Clark), the Pittsburgh iteration of the nationwide Art+Feminism Wikipedia Edit-a-thon, an annual event intended to address the gender gap that persists among Wikipedia editors (less than 10% of Wikipedia editors are women, reportedly). The Meet-up page she managed for the 2016 event is now one of only a handful of documents attesting to her existence and incredible attentiveness to detail.

I have found other fragments of Alex by searching her Wikipedia user name: “aolivex.” She edited or responded to articles about Pittsburgh’s Hill District, Conflict Kitchen, and Gus Greenlee, along with articles related to her scholarly endeavors, including the pages for the Realistic Manifesto, Neo-Dada, and much more. Her contributions to various articles’ “Talk” pages demonstrate her astuteness as an editor but also her training as a teacher and mentor. She frequently provided both encouragement and constructive criticism to other contributors (on Donald Judd’s “Talk” page, for example.)

Alex was particularly concerned about gender and racial imbalance, as it manifested on Wikipedia. On the Talk page for Social aspects of television (who knew such a page even existed?!), Alex added a section entitled “Television and Race.” “I’m proposing this section which is notably absent, especially given that there is an equivalent for gender,” she wrote in December 2015. Oh, the countless hours she must have spent trawling through pages of content! 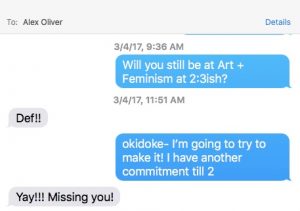 From our last conversation.

I am so sad to report that the last time Alex and I texted each other was on March 4, 2017, on the day of the 2017 Art+Feminism Wikipedia Edit-a-thon. I had had a busy day and was feeling too tired to attend the event, so I texted Alex to say that I’d “have to find another way to see you soon.” I knew she would be disappointed, because she was always someone who “showed up.” Of course, I deeply regret that I didn’t see her then.

I recently Googled “dead Wikipedians,” and discovered a page entitled “Deceased Wikipedians.” I don’t know that Alex’s name belongs here, but I am grateful that she remains somehow extant on this platform. That she, perhaps unintentionally, is still embedded in the pages of many articles, no matter how obscure.

The 2018 Pittsburgh Art +Feminism Wikipedia Edit-a-thon is this Sunday, March 25th. I will be volunteering at the event.